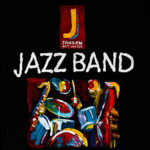 Musicians from the Jansen Jazz Band will perform in the Chamber Hall at the Jansen Art Center on Thursday, February 18 at 7:30 p.m. The Jansen Jazz Band is made up of musicians with a variety of skill levels and age ranges who come together after six weeks of practice to showcase their talents to the community. The group is directed by Steve Herrick, recognized in 2006 as an “Outstanding Music Educator” by the San Juan Music Educator’s Association.  Herrick has been teaching music for 41 years. The diverse group is made up of teachers, a doctor, a retired U.S. Army band member, the organizer of the Lynden Music Festival, a secretary and a few high school students.  The Jansen Jazz band is sponsored, this season, by the Mount Baker Rotary Club. When describing the Jansen Jazz Band, Herrick says, “This is a true community band.” He says each performance is unique and special in their own way. One of his fondest memories with the jazz band was at their debut performance – the venue was packed, the music on point and the sounds and reactions of the audience reflected their enjoyment. Herrick says the band members enjoy playing jazz, especially the big band sounds of the swing era. His role in the band is “cruise director,” guiding everyone in making music and having a good time doing so. Erik Vanerstrom, band member and Jansen Art Center Board Member, said the jazz band has opened doors to meeting talented musicians in the community and allows him to practice playing music with a group as a cohesive unit. It allows him to play the music he loves. Vanerstrom said, “It seems like a rare opportunity to be able to play in a community jazz band in a small town and have such a great avenue to do so as the Jansen Art Center.” Karen Visser, music and performance coordinator at the Jansen, describes the Jansen Jazz concerts as “a rip-roaring good time.” Some people performing haven’t had the opportunity to do so since leaving high school and some are seasoned performers. The mix makes for a relaxed, fun environment where everyone attending feeds off of the energy of the performers. Visser admires the way Herrick “pulls the most amazing music out of the players” by taking an encouraging and fun approach. The band currently has about 20 members.  They enjoy being there just as much as the audience as they get the chance to receive input and showcase their talent. The concert, at $10 per ticket, sells out every session. Visser believes it is great for the audience to come support the musicians and everyone leaves the concert with a smile. The Winter Sessions Performance will include performances of “Burritos To Go,” by Victor Lopez and “Baby Drives a Fast Car,” by Paul Clark. If you would like to play with the Jansen Jazz Band, the best way to get started is to attend the Jammin’ and the Jansen Open Studios for Jazz on Monday nights from 6-8pm.  The cost is $5 per session (free for members of the Jansen Art Center). Louis Armstrong, celebrated jazz icon, said, “There are two kinds of music, the good, and the bad. I play the good kind.”   To enjoy the good kind of music at the Winter Session Performance of the Jansen Jazz Band on Thursday, February 18,  purchase your tickets in advance at the Jansen Art Center Gallery Shop, open Tuesday through Saturday from 11am-5pm (open until 7pm on Thursdays), or online at http://jansenjazz.brownpapertickets.com.