The Library Workshop, located on the second floor of the Jansen Art Center will feature the work of artist Honghong Wang. Please join us for the Opening Reception on Thursday, December 7 from 6:00 PM – 8:00 PM.

There was a box of soft pastels and a box of oil pastels, which I had kept for a long time as a child—these were the prizes that I won in kindergarten for a drawing competition. Sadly, little came out of those pastels, as China was about to enter the period of political change known as the Cultural Revolution, and art was taken out of school curriculum.

My first exposure to the Western art was at Nanjing University where I studied physics. I still remember how packed the school theater was that evening when a lecture was given about the Renaissance, the total silence, the eyes were drawn to the large projector screen, and the excitement on those red faces when the lights were turned back on.

I read “The Moon and Sixpence” by W. Somerset Maugham during my graduate school years at the University of Oregon. The fictional character, which was inspired by the life of the French painter Paul Gauguin, moved me. I was also intrigued by Maugham’s analogy of paintings to Oriental rugs. What does he mean?

My serious attempt at art started in 2008, after seeing the full collection of Rembrandt paintings in person. For a year, I studied painting, printmaking, and sculpture with my teachers at Portland Community College in Rock Creek, Oregon. I have been drawing from life ever since. Last year, I studied oil painting with Elisabeth Larson at the Jansen Art Center.

This is my first solo exhibit. The majority of pieces are life drawing studies meant for paintings, which have taken up a life of their own. It is neither about the style one is in nor about the object one is after. It is an attempt to see—to see attentively, and to question constantly. Nothing is set in stone. 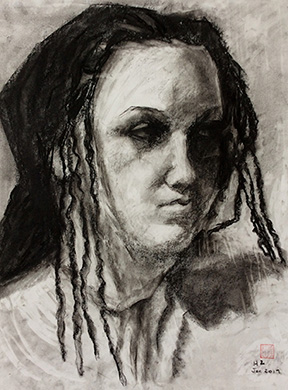