The Jansen Art Center is pleased to present this retrospective of the work of Johannes Kunst as our featured artist in the Fine Arts Gallery this winter.

Johannes Kunst was born in Leeuwarden, The Netherlands, in 1938. He immigrated to the United States in 1958, returning to the Netherlands five years later to marry his childhood sweetheart, Harmanna Antonia Homburg.

In Holland, his first important job was as a photographer for a local newspaper. During this time his work was shown in several exhibits worldwide.

Returning to the United States, he and his family settled in Glendale, CA, where he began his painting career. In 1969 he became art director for the Los Angeles County Department of Regional Planning. Among his many projects, he designed the “Environmental Development Guide,” the county’s first long-range general plan.

By 1974, Mr. Kunst’s artwork was being shown throughout the Western United States. After an initial presentation at the Comsky Gallery in Beverly Hills, he joined a group called “Dutch Artists on the West Coast” and together they showed their work in galleries and museums throughout California, Oregon, and Washington.

In the early 1980’s, while continuing to evolve as a painter, as well as designing and building a home in Malibu, Mr. Kunst developed a line of greeting and Christmas cards. Known as the “Hanke Design Company,” the cards sold in museum gift shops and high-end department stores, not only in the states but also in Japan, England, Switzerland, and Holland.

The 1990’s were a particularly fertile period. Among others, there were showings in the Line-Art in Gent, Belgium, the Shell Company in Amsterdam, and the Jaarbeurs in Utrecht, Holland.

In the early 2000’s the Kunst’s settled in Lynden, WA. When the Jansen Art Center opened he participated in several group exhibits.

Mr. Kunst’s work is complicated. Rooted in childhood memories of WWII Europe, his paintings often reflect those traumatic times, but in bold bright colors with some humor as well. Although his style has evolved over the years, a unique spirit flows throughout each decade of his work.

This retrospective includes representative pieces from different phases of his lengthy career. 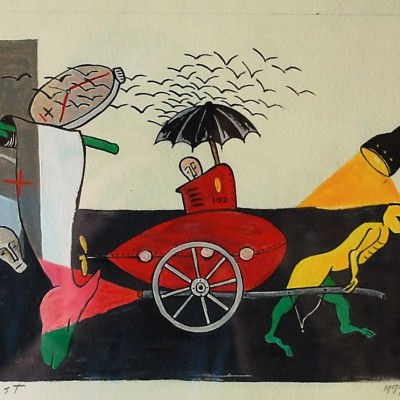 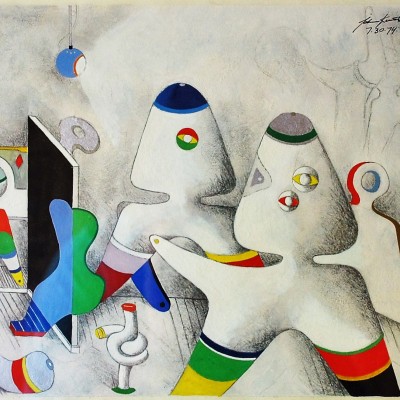