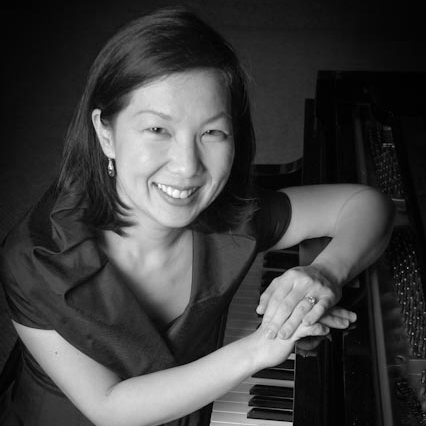 Pianist Jessica Choe began her musical studies at the age of 3 in her native Korea where she was a prize winner in several national piano competitions including the Samick National Piano Competition, the Korea Daily Times Piano Competition and the Korean Department of Education Music Competition.  After immigrating to the US at the age of nine, she performed throughout the continental United States in such halls as the Kennedy Center for the Performing Arts, Seiji Ozawa Hall at Tanglewood, Lincoln Center and the Barns at Wolf Trap.

Before moving to Seattle, Cordula Merks held concertmaster positions with Germany’s Essen Philharmonic, Bochum Symphony and Bergische Symphony. She played as part of Claudio Abbado’s famous Lucerne Festival Orchestra and toured in Europe as concertmaster of the Mahler Chamber Orchestra.

When not playing in the orchestra, Merks enjoys playing as a soloist and especially as a chamber musician and has performed in the US, Israel and all over Europe.

Merks was born in Germany and spent her childhood in Holland. She started playing the violin at the age of 6 and was accepted by the Young Talent Department of the Royal Conservatory in The Hague at the age of 12.

Principal Cello of the Seattle Symphony since fall 2011, Efe Baltacıgil was previously Associate Principal Cello of The Philadelphia Orchestra since 2003. Recent highlights include his debut with the Berlin Philharmonic under Sir Simon Rattle, performing Bottesini’s Duo Concertante alongside his brother Fora; performances of Tchaikovsky’s Variations on a Rococo Theme with the Bilkent Symphony and the Seattle Symphony; and Brahms’ Double Concerto with violinist Juliette Kang and the Curtis Symphony Orchestra.

Born in Istanbul, Turkey, Baltacıgil started studying the violin at age 5 and changed to the cello at age 7. He received his bachelor’s degree from Mimar Sinan University Conservatory in Istanbul in 1998 and an artist diploma from the Curtis Institute of Music in Philadelphia in 2002, where he studied with Peter Wiley and David Soyer. Baltacigil was named String Player of the Year in Turkey in 2013.

Jessica tells us, “”The three of us love to get together in our spare time and read trios together.  It was in one of these readings that we discovered the Smetana Trio.” During this concert, the musicians will be performing the work of Bohemian Composer Bedrich Smetana – a trio that was composted in 1855 after the death of his oldest daughter Bedriska to Scarlet Fever. Jessica describes the trio as “displaying a wide range of musical expression.  It is full of grief, tenderness and passion.”

The group is looking forward to playing at the Chamber Hall at the Jansen Art Center, which features an immaculate Schimmel piano. Choe adds, “We hope that the audience enjoys the program as much as we love playing it.

General Admission: $25.00
Student Tickets: $10.00 (Student tickets available for everyone under 18, or at any age with a current student ID – show your ID when you pick up your tickets at Will Call).
Online Convenience Fee: $1.50

Tickets are also available at the Gallery Shop at the Jansen Art Center.