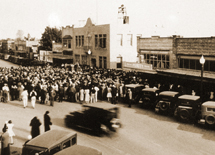 In August, 1927, the Lynden City Council approved plans to construct a new city hall on the site of the previous one. Local contractors Zevenbergen and Zoet submitted the low bid of $15,900 and were awarded the contract along with F.M. Haskell of Bellingham that won the bid to install plumbing and heating. On January 17, 1929, the building was formally opened. The upper floor consisted of the City Council Chambers which would accommodate between 350 and 400 people (when filled to full standing capacity) and the public library. City offices including the city water department were located on the main floor along with the police judge’s office and the Camp Fire Girls quarters at the rear of the building. 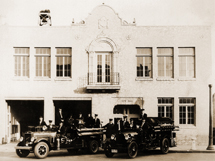 Half the main floor housed the Fire Hall with automatic fire doors that could open in five seconds. Drying racks for hoses were constructed above the furnace room. “Big Ole”, a siren that could be heard for as far away as five miles was installed on the roof and was operated from the telephone office. The rear of the engine house provided housing and kitchen facilities for the firemen. The basement was devoted to the city jail, marshal’s office, furnace room and men’s and women’s restrooms as well as a fireproof vault where the city records were stored. According to an account in the Lynden Tribune, the jail could safely and securely house “even the most desperate type of criminal.”

The Eleanor and Henry Jansen Foundation is Formed

Eleanor and Henry (Hank) Jansen were lifelong residents of Whatcom County. Hank Jansen was an entrepreneur who built Lynden, Inc., from Lynden Transport, a local company started by Ed Austin in 1906. Today, Lynden, Inc. is a worldwide multi-mode transportation company. For many years, Hank Jansen had been active in supporting charitable and civic activities, particularly those operating in the community where he grew up and got his start in business. Eleanor Jansen, an accomplished weaver, was also an active community volunteer. As the Jansens became older, they wanted to arrange a way for community support to continue after their deaths. In 1995, they created the Eleanor and Henry Jansen Foundation and in 1997 the Foundation became a supporting organization of the St. Luke’s Foundation, an organization in which Hank Jansen had been an original director. The formation of the Foundation enabled the Jansens to express their long held values of giving back to the community, providing financial assistance to a wide variety of charitable and civic activities throughout northwest Washington and Lynden, the Jansen’s home town.

The Visioning Committee Comes Together 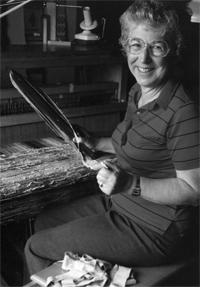 In August, 2010, a visioning committee was formed to explore how the needs of the community could be accommodated in an affordable place where artists could create, teach, share and engage the community in an appreciation of the arts. Local artists were identified and asked for their opinions regarding the different art disciplines. The visioning committee presented its findings to the Eleanor and Henry Jansen Foundation in November, 2010. Visioning committee members were: Nell Veenstra, Doug and Terhi Broersma, Ted and Dee Goble, John Kramar, Ken Stremler and Jerry and Heidi Doornenbal.

The Jansen Art Center Founding Board of Directors is Formed

In Spring 2011, a volunteer Founding Board of Directors was formed to develop the mission and goals of the Jansen Art Center. Members of the Founding Board are: Randy Bode, Heidi Jansen Doornenbal, Scott Korthuis, Sue Lobland, Bill Mancha, Lesa Starkenburg-Kroontje, Kem Stremler and Brad Williamson.

The Eleanor and Henry Jansen Foundation agreed that if the City of Lynden would joint venture with the Foundation by gifting the old City Hall to the Foundation, it would renovate and transform the building into an art center that would provide a welcoming place where atists could create, teach, share and engage the community in an appreciation of the arts. At its June 6, 2011 meeting the Lynden City Council voted unanimously to transfer ownership of the building to the Foundation.

Architects and Contractors are Retained

While negotiations with the City of Lynden were ongoing, the Eleanor and Henry Jansen Foundation commissioned Zervas Group Architects to create a detailed floor plan for the renovation, flexible enough that studio spaces within the building could be used by a variety of different disciplines. Local contractor Exxel Pacific was retained to oversee the renovation.

Although the building was still under construction in several areas, the weekend of March 30-April 1, the Jansen Art Center held a community open house attended by more than 3,500 area residents, eager to see what the much anticipated center would be. The Jansen Art Center Grand Opening took place August 4, 2012. The center is now open to the public Tuesday through Saturday 9am-5pm.

The Jansen Art Center has received a 501 (c) 3 status and the Eleanor and Henry Jansen Foundation has gifted the building to the non-profit organization.