A look at the man behind the canvas: Terry Redden

By Erik Swanson Look at art, look at it hard. If you don’t see something at first, keep looking. The advice of Lynden artist Terry Redden comes from a love for art that goes back over 32 years. For Redden art is a gift from the artist to the viewers. It is a process of puzzling, moving and owning it through interpretation. Two years ago he began creating his own art. 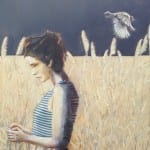 Redden has a series of paintings on display at the Inn at Lynden, the new boutique hotel in downtown Lynden. Most of the pieces feature a single figure in a unique setting. One painting shows a man at his kitchen table. He is whittling a branch. His face downcast. The colors are subdued. The man’s glasses are on the table. A single blossom remains on the branch. Redden says he wants his paintings to create an allegory. He created them with themes of loneliness, isolation and vanity in mind. The paintings invite interpretation while avoiding such abstraction that no one may arrive at the intended theme of each painting. He wants his paintings to puzzle people. He wants them to keep looking. “I want people to own it through their own story that they apply to it.” Redden wants his work to be a gift to others. While in school he would often visit the Museum of Modern Art in New York. He felt as though each artist had given him a gift through their work. 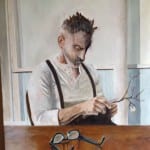 Monet created an entire environment for viewers. Redden describes the works of Monet like a comic strip where the canvases run together, seamlessly, to create another world. The viewer just has to step in. The experience of seeing the work of some of the world’s greatest artist in person cannot be had through pictures. Redden says when you are there in front of it you think, “My life is complete.” 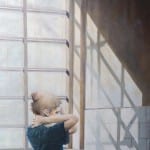 When Redden studied to achieve his Masters of Fine Arts his professors inspired him through their skill in figurative painting. The way his teachers described a scene with very few brush strokes stayed in his thoughts for thirty years. Out of grad school he began work as a Residential Designer and quickly lost the time to paint. At fifty-nine-years-old Redden says its now or never.

Standing in front of a canvas takes a huge amount of focus, he says. Dedicating hours every day is exhausting but each time he does a painting he finds himself hoping it will never be finished. Sometimes he’ll finish a painting and can’t believe that he actually did it. He says it is extremely satisfying to be able to share his paintings with other people.

Redden volunteers at the Jansen Art Center in Lynden and dedicates many hours to finding the best artwork for the juried exhibits at the J. He works together with other talented volunteers to showcase amazing artists both within and outside of Whatcom County. He recently began organizing an artist critique for artists exhibiting their work at the art center. “The opportunity to have a peer critique is invaluable,” he says, “and provides the artists with feedback about their work. Each artist has the opportunity to hear both positive and negative comments on their work and they are often encouraged and benefit by the experience.” 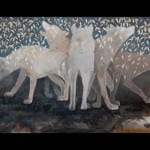 The idea for an artist critique came from his time in art school where it was a common occurrence in the peer review process. Redden says the participating artists have loved the experience so far and he plans to organize it with each new exhibit at the Jansen Art Center. Redden has loved witnessing the art center exhibit extremely talented individuals. To be able to find art by artists like Lynn Zimmerman in a small town gallery is amazing, he said. The way that she captures atmosphere is indicative of a profound artistic depth of knowledge. Her art is currently on display in the Early Summer Juried Exhibit at the Jansen Art Center. Redden says when he paints he wants it to be a free flowing process, loose and relaxed. “I want something to break out. To be wild and ecstatic,” he adds. 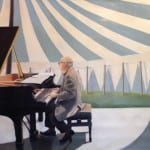 Giving art a leading role in his life has changed the lens with which Redden sees the world. He compared his change of mind to the way that people who study Tai Chi rewire their brains about how they move in space. He now notices shapes and movement in everyday life in a way he never did before. He finds himself looking at details through an artistic eye. Suddenly his environment is an inspiration for his art. Even in the food he cooks. “Sushi is one of the most beautiful foods created by man,” Redden says, “The way you cook and plate your food can be an artistic endeavor in itself.” When he cooks brocc oli, for example, he is sure to cook it slowly because overcooking causes broccoli to lose its vibrant green color. Redden says he tries to treat every material he handles with respect. Canvas, paint or broccoli. Two years into his journey he is happy to see his pieces on display at the Inn at Lynden and enjoys the idea that people may be moved or benefited by his work. Artwork may be purchased through the Gallery Shop at the Jansen Art Center, opened Tuesday – Saturday from 11am-5pm. One of Redden’s paintings features an aged musician playing a grand piano in an empty circus tent. The subject is there, interpretation is up to you.